This morning we pushed out a 2.3.2 patch release to address a single bug (see #7118) related to dropdowns and command/control clicking links in Firefox.

Work on Bootstrap 3 continues and we’re almost ready to do an official release candidate. We’ve addressed nearly all our chosen changes and are now at a point where we’re smoothing things out as much as possible. We’ll share more information on the RC and v3 in the coming weeks.

Welcome to the Bootstrap Expo 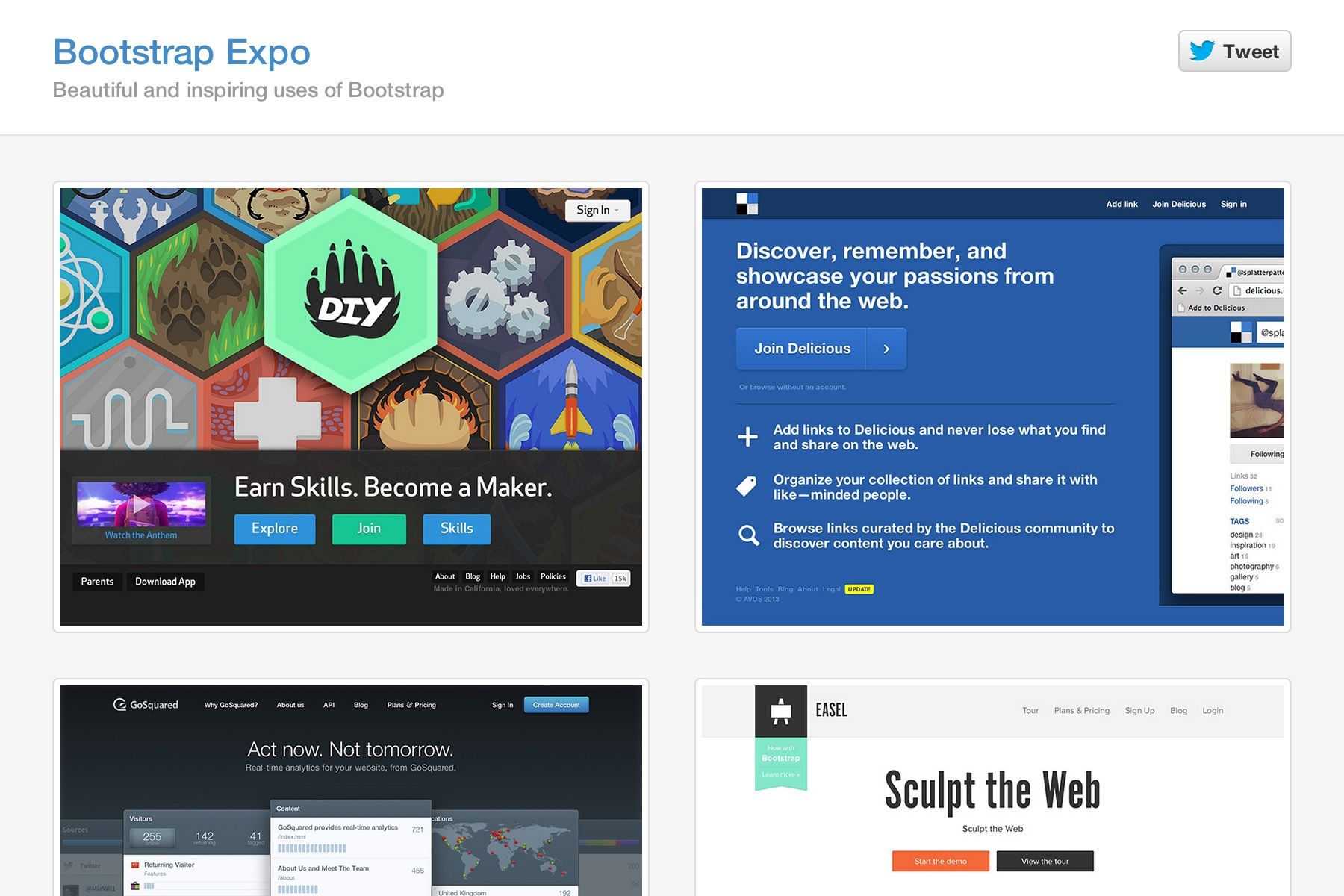 The Bootstrap Expo is all hosted on GitHub, meaning recommending new sites is as easy as opening a new issue. It also keeps the primary Bootstrap repo focused on code and documentation, and not dozens of extraneous images.

As a side note, the Expo is the second project appearing under the twbs organization (this blog is already there in private mode). We’ll be moving Bootstrap and the Customizer over with v3 soon.

While Bootstrap 2.3 was the last planned release ahead of 3.0, we’ve just pushed out a small patch to address a few lingering JavaScript bugs. Bootstrap 3 is still under development and is trucking along quite nicely. We’ll have more to share there soon.

Check out the 2.3.1 pull request for more details on the changes in this release.

Side note: Aside from the fixes in this release, future bugs will only be addressed in 3.0, or punted entirely, as appropriate. This release just fixes a few things left broken that we didn’t feel comfortable ignoring for the next several weeks.

It has been far too long, friends. Nearly three months has gone by since we pushed out a new version of Bootstrap, but fret not, for that void comes to a most excellent halt tonight. After numerous delays, including a bout with the flu, we’re happy to announce the release of Bootstrap 2.3.

Bootstrap 2.3 includes some new features, as well as the standard bunch of bug fixes and docs improvements. Here are the highlights:

As always, you can see a more complete list of changes by viewing the 2.3.0 milestone or 2.3.0 pull request on GitHub. Most of the issues not mentioned above are minor CSS tweaks and documentation typos.

A note on tooltips

When we released 2.2.2, we changed the insertion strategy for tooltips and popovers. Instead of appending to the <body> by default, they used insertAfter. This change fixed number z-index issues and ultimately makes controlling and styling tooltips much easier for folks.

Unfortunately, this also resulted in a few bugs, namely breaking input groups by interfering with adjacent CSS selectors. Instead of reverting the insertion method, we’ve added a new container option. If you run into a situation where insertAfter doesn’t work for you, go ahead and set that option to whatever element works best for you.

As we’ve previously mentioned, v2.3 is our last planned release before moving onto v3 fulltime (pending any catastrophic fuckups). For the latest, follow the Bootstrap 3 pull request. Otherwise, here’s the lowdown:

And that’s just some of the highlights. Again, peep the pull request for the most up to date changes as we continue to chip away at this bad boy. Feel free to comment on that, or hit us up on Twitter, for feedback of any kind.

With 2.2.2 out the door, our attention has shifted almost entirely to the next major update to the project, Bootstrap 3. Things are coming together and we want to give you an update on what’s next and give you a chance to share your thoughts.

Overall, Bootstrap 3 will be rather narrow in focus compared to the last major update. In short, we’ll drop legacy code, improve responsive CSS, and centralize community efforts. Specifically, v3 will address the following:

To help communicate and track changes, we’ve opened a Bootstrap 3 pull request. Follow along with what we’re working on, ask questions, or contribute by using that pull request as a reference point. We’ll be keeping it up to date as development progresses.

In addition, we’re going to try to accelerate versioning by focusing on individual components for major releases after 3.0 (e.g., modals or the carousel could be punted to a 4.0 release). Given this approach, it’s less important for us to stuff a lot of feature work into 3.0.

Beyond that, we’re open to addressing a couple of things with 3.0 like form styles and mobile enhancements. We want to limit these kind of changes for 3.0 though, so let us know what features are most important to you.

We mentioned this a few times in recent months, but with 3.0 we’ll be transitioning to a new organization on GitHub, twbs. The username is homage to H5BP, one of the most notable front-end tools out there, and of course, Twitter. The move shouldn’t present any problems to you fine folks.

With the move to the new organization, the URLs of the Bootstrap docs must change. We host our docs on GitHub Pages and those URLs are based on user or organization names. To better future-proof things, we’ll be making https://getbootstrap.com/ our base URL instead of just a redirect.

For us, this will be the most painful part of the move. Given how prolific links are, we’ll also try to setup something at the old URLs to redirect folks, but we’re unsure how we will do that just yet. Perhaps a shell repository with dummy pages pointing to their replacements? Time will tell.

The larger goal behind the organization move is to bolster the Bootstrap community. To start, we’ll be transferring the main Bootstrap repo, the Heroku customizer app, and the blog to the new organization. But more importantly, we want to bring community projects into the organization as official projects.

From language ports to extensions to snippets, we want to work with leaders of key community efforts to see if this makes sense. We’re still working on the criteria for this and have yet to reach out to anyone.

If you think your project fits, hit us up. We’ll be looking to add projects shortly after 3.0.

Bringing additional projects into the fold is going to be a huge undertaking as managing the existing code is already a hefty task between Jacob and myself. To that end, we’ll be looking to add one or two people to the team to help us manage issues, pull requests, etc. This is a huge deal for us and we’ll be taking our time on figuring it all out.

Growing the team with official contributors, other than the two of us, is also a goal. Similarly, we’re super nervous about this and have no clear timetable for it as well.

Bootstrap is still just getting started. There is so much more awesome stuff to do and we want to work with you awesome folks to do it all as best we can. We hope you’re as excited as we are.

Please reach out to us on Twitter or GitHub with any questions or feedback.