Our final beta for Bootstrap 5 has come with some amazing new changes (including a new component!), documentation updates, and more. We’ve also fixed some important bugs since our last release, in particular with our dependencies. Next up is our stable release!

Keep reading for a recap of what’s new in Beta 3.

Thanks to our newest team member, @GeoSot, we have a brand new component to unveil in Beta 3—introducing offcanvas! Built on and sharing fundamental pieces of our modals, the offcanvas comes with configurable backdrop, body scroll, and placement. Offcanvas components can be placed on the left, right, and bottom of the viewport. Configure these options with data attributes or via the JavaScript APIs.

We’re excited about iterating on the new offcanvas component and building additional examples and demos with you. Please share any feedback on an issue or pull request as you start to use it in your projects. 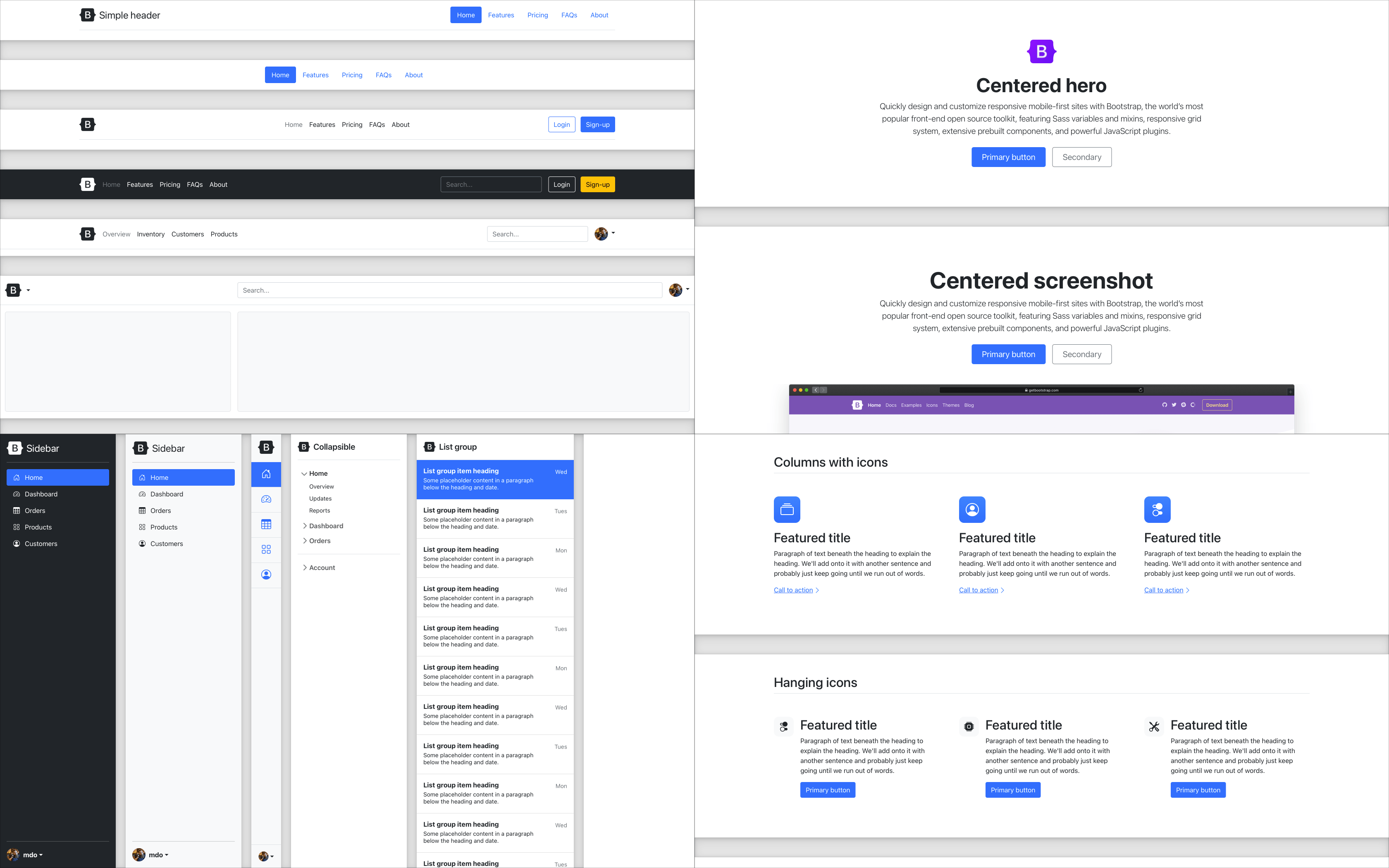 Our examples have been updated in Beta 3 as well. We’ve added four brand new snippet-heavy examples and refreshed a few others. New with this release are several snippets for headers, heroes, features, and sidebars. These new snippets will continue to grow with new additions over time, showing just how fun and easy it is to build with Bootstrap. 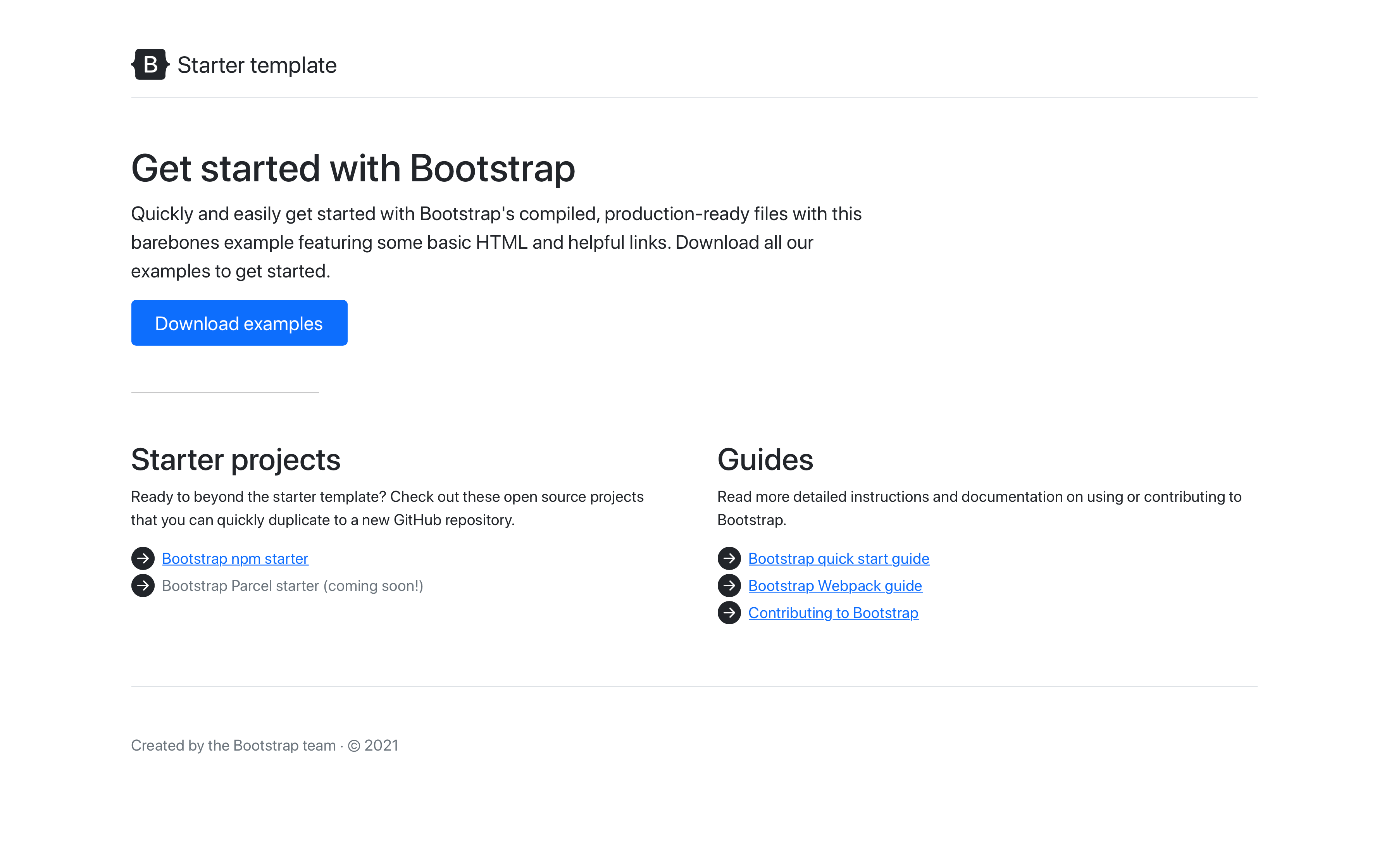 Lastly, we’ve updated our pricing, checkout, and sign-in examples. We’ve also added a new jumbotron example to show you how to create your own jumbotron since we removed it in Bootstrap 5.

Since our last release, we’ve added a new section to nearly every component and utility documentation page for the source Sass code. Where appropriate, we now list Sass variables, maps, loops, and animation keyframes. These are directly linked from our source files, so whenever we ship new code, they’ll automatically be up-to-date.

Some highlights from the rest of our documentation updates and bugfixes include:

Head to GitHub for a complete list of issues and pull requests in v5 Beta 3. You can also review the v5 beta 3 project board, too.

A huge thanks to another new team member, @rohit2sharma95, for the dozens of pull requests, bug fixes, and code reviews for our JavaScript plugins.

Looking ahead, we’re eyeing our first stable release for Bootstrap 5! But we also have some other releases on the horizon:

As mentioned in our last release, after v5 goes stable, we’ll look to add some of the awesome features we’ve built up in our backlog. Check out the v5.1 project for an idea of what’s being planned. Feel free to open issues or pull requests if you have any additional ideas!

Bootstrap Icons v1.4.0 adds over 60 new icons as part of a brand new weather category. Also included are some long requested improvements to vertical alignment and a handful of updates to tags and categories.

Keep reading for a preview of the new icons and how icon alignment has changed.

The new weather category includes over 60 icons for various weather and atmospheric conditions. From fog and haze to rainstorms and hurricanes, we now have icons for just about every weather situation. We undoubtedly have some more work to do to refine and add to this new category, but it’s a pretty big addition to the project. Let us know what you think and what’s missing so we can keep adding to it over time.

Also new in v1.4.0 are some alignment changes—before and after are shown above. Previously we used vertical-align: text-top in our CSS to aligning individual icons. This wasn’t as much of an issue when we only had SVGs, but with the addition of icon fonts and their generated CSS in v1.2.0, we had to make some changes.

New in this release is a change to vertical-align: -.125em. This new alignment is similar to that found in the tried and true Font Awesome project. This change essentially raises icons up about 1px to better vertically center them with nearby text.

It may not be perfect in all implementations, so additional changes might still be needed, but this should give you a stronger baseline to start (pun intended). Should you still run into issues, please don’t hesitate to open an issue on GitHub.

We’ve also made several updates under the hood, from dependencies to build tools. This has resulted in improved speeds for our development scripts and more resilient tooling for packaging our icons. We’ve also included category names into the fuzzy search on the homepage, making it a lot easier to search for groups of icons.

We still have some work to do on our docs and search, so stay tuned as we’ll eventually add category pages and more for easier browsing and navigating. If you’re reading this and want to help improve the Bootstrap Icons docs, please consider opening a PR anytime.

Our second beta has arrived for Bootstrap 5! We delayed its release to iron out some issues with third-party libraries and stabilize our major changes. We’ve also once again shipped some awesome updates to our documentation.

Next up is our final beta, which we may even promote to a stable release depending on how development proceeds. Stay tuned for that! 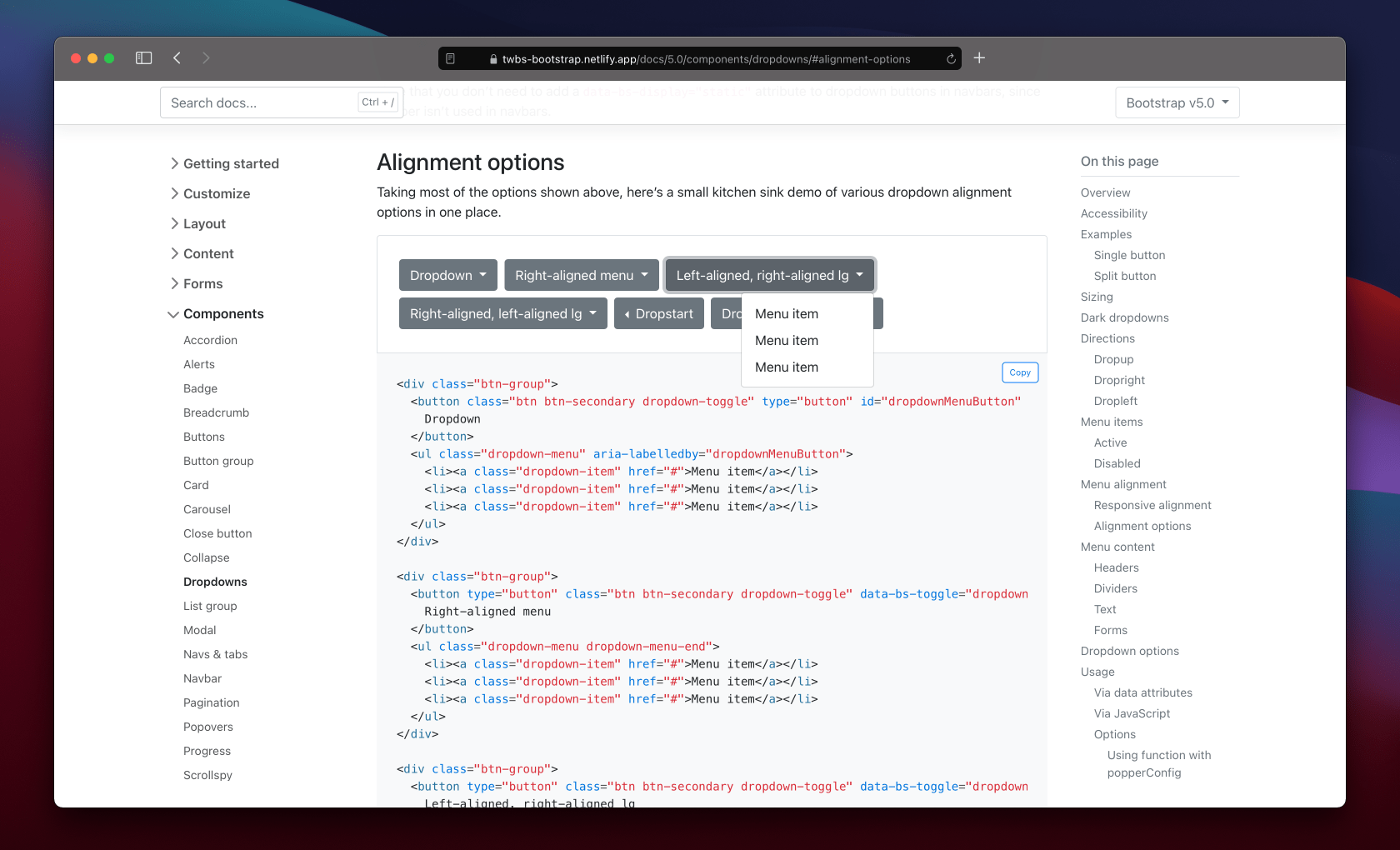 Dropdowns saw a lot of work in Beta 2 because of how much has changed in both our JavaScript and in Popper.js (which we depend on for most dropdown, popover, and toolip positioning). We’ve modified our dropdown plugin to add a new data attribute to help separate our own positioning styles with that of Popper’s. The issues we saw—like a .dropstart menu overlapping a button or an incorrect responsive .dropdown-menu-end class—were largely the result of competing positioning.

Now when dropdown menus have data-bs-display="static", we’ll add data-bs-popper="static" via JavaScript to their associated .dropdown-menu. When dropdowns are in our navbars, their menus will have data-bs-popper="none" added. This separates two different positioning libraries, ours and Poppers, and ensures all behaviors are supported. You can see all the options in a new example in our docs. We updated our CSS selectors to use these new data attributes, too.

In addition, we’ve removed the initial margins from dropdowns and popovers, instead of relying on Popper’s offsets. These also conflicted with the default styling for elements positioned by Popper.js. Relatedly, there was a bug in how popover arrows were aligned that has now been resolved.

We’ve overhauled our color utility documentation, separating the text color classes from our background-color ones. We’ve also made extensive use of our scss-docs shortcode to include tons more code snippets in our docs.

Both pages now include a new Sass section, showing relevant snippets of our source code that are related to each set of utilities. We list all our available color variables, our theme color variables and maps, associated mixins and loops, and even where these utilities are generated in the utilities API.

Expect this kind of documentation improvements to continue into our next release. Follow along in the draft pull request that adds Sass docs to all our components on GitHub.

We’ve spent a significant amount of time in Beta 2 improving our JavaScript plugins to fix bugs and improve behaviors since dropping jQuery.

Across the board, we’ve made a few small changes to other components that are worth a brief mention here.

For a more complete list of changes, check out the v5 Beta 2 project board or list of issues and PRs in this release.

We have three releases coming up next for the team:

Our v5 Beta 3 will continue to focus on JavaScript issues and documentation improvements. Tooltips in particular need some attention after our fixes to dropdowns and popovers. After v5 goes stable, we’ll look to adding some of the awesome features we’ve built up in our backlog. Check out the v5.1 project for an idea of what’s being planned.

Bootstrap v4.6.0 is here with a couple new features, several bugfixes, and some awesome documentation updates to make v4 more maintainable alongside our development of v5.

Read on for the highlighted changes or head to the v4.6 docs to see the latest in action.

The biggest change in v4.6.0 is under the hood—we’ve overhauled our development environment to match that of v5. Our v4.x docs are now powered by Hugo. That means no more Ruby dependency for v4.x, improved maintainability between major versions, faster development, and incredibly fast build times compared to Jekyll.

Also available in the v4.6.0 release on GitHub.

Our second beta of v5 is coming. We’re working on ironing on some kinks from the update to Popover 2, which has taken longer than expected. This affects our dropdowns, popovers, and tooltips. Once some of the major issues are resolved, we’ll ship our next beta.

Say hello to over 60 new icons with Bootstrap Icons v1.3.0! We focused our efforts on filling in some holes and expanding some coverage of a few categories. We’re super happy with how the new additions came out and hope y’all love them, too!

As usual, we also snuck in some bug fixes to existing icons and ours docs. After this release, we’re back to focusing on shipping updates to Bootstrap v5 and v4. More on that soon, and in the mean time, enjoy the new icons!

Have some ideas for new icons we should consider? Open an issue to tell us about it!

Since we added icon fonts in v1.2.0, it’s been possible to use a CDN to deliver and use Bootstrap Icons in seconds. Include the stylesheet, place short HTML snippets where you want icons, and you’re done! If you want to include it yourself, here’s how.

Want to see it in action? We’ve put together a helpful CodePen demo for using Bootstrap Icons fonts via CDN.

ProTip: Most browsers do not allow SVG sprites to be used across domains, which is why having icon fonts (when SVGs are the preferrable and more accessible method of delivering icons) are so useful. Whenever possible, please use SVGs over icon fonts.