While we continue to work on Bootstrap 5, I’ve been jamming away on the Bootstrap Icons library, continuing to create as many icons as time allows. Today marks the third alpha, and massive update to the project. We’ve officially crossed 500 icons!

We’ve cleaned up existing icons, created new permalink pages for each and every icon, and added hundreds of new icons—all in one release.

I’ve added 221 new icons in our third alpha, the most ever in an alpha release thus far. And while I was drawing all these new awesome icons, I also cleaned up the existing ones by changing their viewBox size and redrew many to ensure more pixel perfect icons.

Why change the viewBox? In the first two alphas, I was drawing icons on 20x20 artboards in Figma. This seemed like a good idea, but every icon was roughly 16x16, so it ended up being dead space. Now, every icon has been updated to eliminate the 2px inner padding, making the viewBoxs 0 0 16 16 instead of 0 0 20 20.

This change has some slight file size improvements, and should help with sizing and positioning as well.

Looking for a particular icon, but don’t want to download the entire project to snag the SVG source code? Need to send someone a link to an icon? Look no further than the new icon permalink pages!

From the Bootstrap Icons homepage, click any icon and you’ll be taken to a page dedicated to just that icon. It features the icon in various sizes and renders the source code like you’re used to seeing in Bootstrap’s docs.

Since this is still an alpha, some features are still missing from our docs. This includes unlinked tags, no category listing, and no copy to clipboard. I hope to see those added before our stable v1.0.0 release. PRs are very much welcome if you’d like to contribute!

Alpha 3 has been published to GitHub and npm (package name bootstrap-icons). Get your hands on it from GitHub, by updating to v1.0.0-alpha3, or by snagging the icons from Figma.

There’s a brand new update of Bootstrap Icons today with our second alpha release! We’ve updated nearly 20 icons and added over 100 new icons since our last release just a few weeks ago.

With over 120 new and updated icons, this is likely going to be our largest update before we our first stable release. We have some renamed icons, fixed bugs, new tools icons, new typography icons, tons of new arrows, and so much more.

Alpha 2 has been published to GitHub and npm (package name bootstrap-icons). Get your hands on it from GitHub, by updating to v1.0.0-alpha2, or by snagging the icons from Figma.

In v4.4.0, we added add() and subtract() functions to avoid errors when using zero values in CSS’s built in calc() function. While these functions work as expected with our build system, which is based on node-sass, some alert developers noticed that things broke when using another Sass compiler like Dart Sass or Ruby Sass. To resolve this issue, we’ve tweaked these functions a bit to output what we would expect.

Lastly, we also added a theming fix for some custom forms in a disabled fieldset.

Say hello to Bootstrap Icons, our very first icon set that’s designed entirely by our team and open sourced for everyone to use, with or without Bootstrap. It’s still in alpha, but we’re incredibly excited to share it with y’all ahead of our v5 alpha. 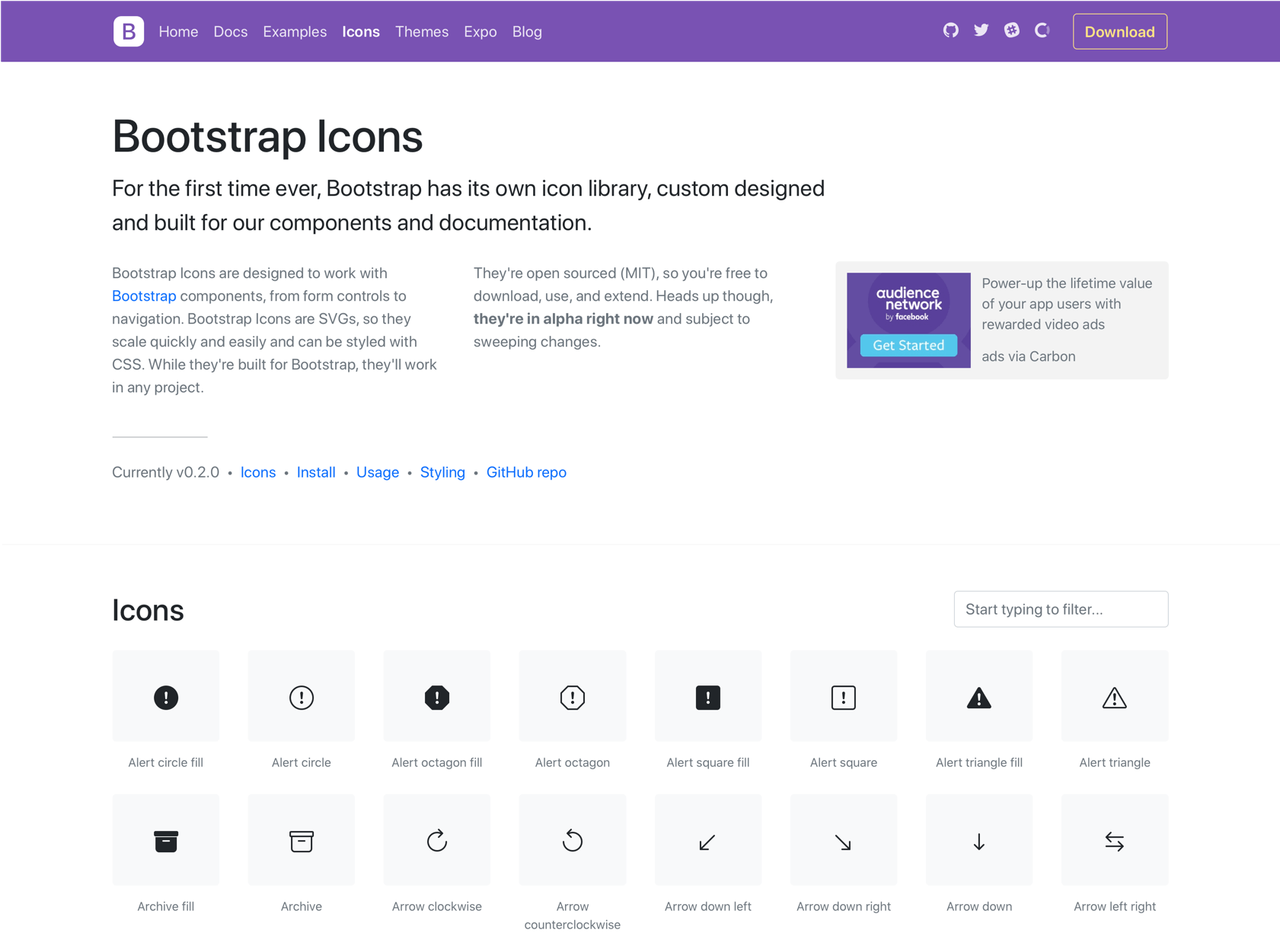 For the longest time, I’ve wanted to design an icon set to better lean how to better draw with different pen tools and to better understand SVGs. In the last several months I’ve used a few different applications, done nearly five style iterations, and finally settled on a single direction. The result? Over 200 icons to start.

I’ve designed these initial icons in Figma and exported them as SVGs. The plan is to share that Figma file publicly once it’s cleaned up and the icon set is more stable. While Bootstrap Icons are first and foremost designed to work with Bootstrap’s components, they can be used anywhere. They’re an entirely separate project and package from Bootstrap, so you can easily use them in any project, or use any other icon set alongside Bootstrap’s CSS and JavaScript.

They’re also open sourced under the MIT license, so you’re free to download, use, and customize as you need. This is an alpha release for now, so bear with us as we get familiar with creating and managing hundreds of SVGs. and more icons will be added over time.

Bootstrap 4 has a new update with a handful of feature changes. We’ve had quite the lengthy pull request to add responsive containers—big thanks to the developers who contribute to Bootstrap for sticking with it and helping us along the way. Nearly all new features will be carried forward into Bootstrap 5, so feel free to start using them now.

Here’s what you need to know about v4.4.0. Remember that with every minor and major release of Bootstrap, we ship a new URL for our hosted docs to ensure URLs continue to work.

We’ve shipped a lot more in this release, so be sure to check out the v4.4.0 ship list of closed issues and merged pull requests for more details.

Head to to the v4.4.0 docs to see the latest in action. The full release has been published to npm and will soon appear on the BootstrapCDN and Rubygems.