Today we’re formally announcing our Long Term Support plan, a documented approach aimed at strengthening the stability and frequency of releases. As part of this initiative, each major version of Bootstrap will receive at least six months of support after it is retired, followed by six months of critical bug fixes and security updates.

Starting today, Bootstrap 3 will move to end of life, and will no longer receive critical security updates.

Bootstrap 4 will move to Long Term Support after we release v4.4 and will no longer receive new features from then on. It will continue to receive bug fixes, security updates, and documentation updates.

Bootstrap 5 is under active development. You can follow our progress on GitHub.

A special thanks to @XhmikosR for his tireless work in pushing us forward.

Earlier this week a developer reported an XSS issue similar to the data-target vulnerability that was fixed in v4.1.2 and v3.4.0: the data-template attribute for our tooltip and popover plugins lacked proper XSS sanitization of the HTML that can be passed into the attribute’s value.

To resolve the issue, we’ve implemented a new JavaScript sanitizer to only allow whitelisted HTML elements in data attribute. You may modify our sanitization implementation to customize the HTML element whitelist, totally disable the sanitization, or pass your own sanitize function (useful if you use your own library). However, for added protection, there is no way to modify the sanitization via data attributes—you must modify these plugin options via the JavaScript API.

In light of this vulnerability, we’re also auditing our security reporting workflows to ensure they’re up to date. This will include steps like adding a SECURITY.md file to our repository and ensuring our private channels and processes are up to date and documented with the team.

Bootstrap v4.3 has landed with over 120 combined closed issues and merged pull requests. This release brings improvements to our utilities, some prep work for moving on to v5’s development, and the standard bug fixes and documentation updates.

During our last release, we shared a small preview of where we’re taking the project next. That’s getting clearer in the coming weeks as our attention turns towards embracing Hugo for ultra fast docs development, removing jQuery in favor of regular JavaScript, and addressing our growing code base.

Keep reading for v4.3 highlights, and see you soon with more details on v5!

We’ve added some new utilities and deprecated some unused code. Here are the key changes in v4.3, broken down by new, improved, fixed, and deprecated.

Checkout the full v4.3.0 ship list and GitHub project for the full details.

Head to to the v4.3.x docs to see the latest in action. The full release has been published to npm and will soon appear on the Bootstrap CDN and Rubygems. 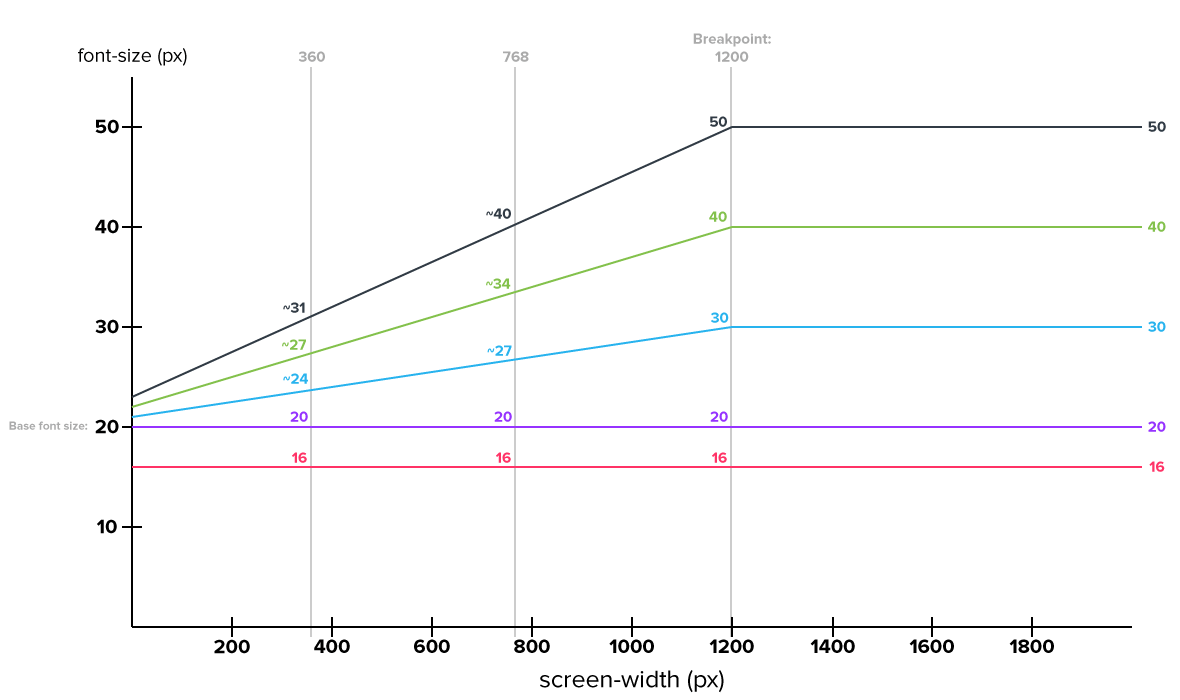 Our biggest new addition to Bootstrap in v4.3 is responsive font sizes, a new project in the Bootstrap GitHub org to automate calculate an appropriate font-size based on the dimensions of a visitor’s device or browser viewport. Here’s how it works:

While responsive font-sizes are disabled by default, we’ve enabled them in the custom CSS that powers our docs starting with v4.3. Please share feedback with us via GitHub issues or on Twitter. We’ve added some light guidance to our Typography docs to explain the feature. You can also learn more by reading the rfs project documentation.

Last December we launched our Open Collective page with our v3.4 release to help support the maintainers contributing to Bootstrap. The team has been very excited about this as a way to be transparent about maintainer costs (both time and money), as well as recognition of efforts.

Right after shipping v4.3, we’ll be tackling a few key changes on our road to active v5 development. These are larger changes to how we maintain and develop Bootstrap and are considered foundational for v5.

We’ll have even more to share soon around v5’s plans after we tackle these bigger items. In the meantime, keep the feedback coming on GitHub and Twitter!

Look out world, we’re shipping Bootstrap v4.2.1 with a slew of new features, bug fixes, and docs updates. On the new features side, we have spinners, toasts, switches, and (finally!) touch support in the carousel. That’s just the tip of the iceberg though.

Heads up! v4.2.0 was incorrectly published to npm, so we’ve had to immediately turnaround a v4.2.1 release. npm i bootstrap@latest should now return 4.2.1. Apologies for the inconvenience!

We’ve crammed months of work into v4.2.1 with over 400 commits since our last v4.1.3 release. As mentioned in our v3.4.0 release last week, we’re working to decouple our releases from my direct involvement to improve the shipping cadence. Expect more improvements there in 2019.

Keep reading for highlights and some insight into how we’re getting to v4.3 quickly, and then into v5 (woo!).

Here are the highlights of what’s new and updated in v4.2.1.

Checkout the full v4.2.0 ship list and GitHub project for the full details. Up next is v4.3 with some bugfixes, a few new modifier classes and variables, and some new utilities.

Head to the v4.2 docs to see the latest in action. The full release has been published to npm and will soon appear on the Bootstrap CDN and Rubygems.

We have v4.3 already planned, so that’s our immediate focus. However, while we’re developing that in the v4-dev branch, we’ll be getting our plans in order for a v5 release.

Bootstrap 5 will not feature drastic changes to the codebase. While I tweeted about the earnestness to move to PostCSS years ago, we’ll still be on Sass for v5. Instead, we’ll focus our efforts on removing cruft, improving existing components, and dropping old browsers and our jQuery dependency. There are also some updates to our v4.x components we cannot make without causing breaking changes, so v5 feels like it’s coming at the right time for us.

Stay tuned for a preview of the plans for v5 in the new year. We’ll share via an issue, ask for feedback, and then settle in to development mode.

Happy holidays, and happy new year to everyone! Thanks for continuing to make Bootstrap an amazing project and community.

That’s not a typo—today we’re shipping Bootstrap 3.4.0, a long overdue update to address some quality of life issues, XSS fixes, and build tooling updates to make it easier for us, and you, to develop.

While we’d planned for ages to do a fresh v3.x update, we lost steam as energy was focused on all the work in v4. Early this year, one issue in particular gained a ton of momentum from the community and the core team decided to do a huge push to pull together a solid release. I regret the time it took to pull this release together, especially given the security fixes, but with the improvements under the hood, v3 has never been easier to develop and maintain. Thanks for your continued support along the way!

Keep reading for what’s changed and a look ahead at what’s coming in v4.2.0.

While we haven’t publicly worked on v3.x in years, we’ve heard from all of you during that time that we needed to do a new release to address

Our documentation and tooling saw massive updates as well to make it easier to work on v3.x, for ourselves and for you.

Head to the Bootstrap 3.4 docs to see the latest in action. Check out the v3.4.0 pull request for even more context on what’s changed.

Upgrade your Bootstrap 3 projects to v3.4.0 with npm i bootstrap@previous or npm i bootstrap@3.4.0. This release won’t be available via Bower to start given the package manager was deprecated and has largely been unused by us in v4 for well over a year. Stay tuned for CDN and Rubygem updates.

Also new with our v3.4 is the creation of an Open Collective page to help support the maintainers contributing to Bootstrap. The team has been very excited about this as a way to be transparent about maintainer costs (both time and money), as well as recognition of efforts.

We’ve been working on a huge v4.2 update for several months now. Our attention has largely been on advancing the project and simplifying it’s dependencies, namely by removing our jQuery dependency. That work has sparked a keen interest in a moderately scoped v5 release, so we’ve been taking our sweet time with v4.2 to sneak in as many new features as we can.

After we ship v4.2, we’ll plan for point releases to address any bugs and improvements as y’all start to use the new version. From there, we’ll start to share more plans on v5 to remove jQuery, drop support for older browsers, and clear up some cruft. This won’t be a sweeping rewrite, but rather an iterative improvement on v4. Stay tuned!