Hot on the heels of v4.1.2, we’re shipping another patch release to address an issue with our browserslist config, fix some CSS bugs, make JavaScript plugins UMD ready, and improve form control rendering. Up next will be v4.2, our second minor release where we add some new features.

But first, here are the highlights for v4.1.3. Pay attention to the change to .form-controls which adds a new fixed height.

Checkout the full v4.1.3 ship list and GitHub project for the full details. Up next is v4.2, so stay tuned for some awesome new features like toasts, dismissible badges, negative margins (responsive grid gutters!), spinners, and more!

Head to the v4.1.x docs to see the latest in action. The full release has been published to npm and will soon appear on the Bootstrap CDN and Rubygems.

We’ve been busy these last couple months since launching v4.1.1, but we’re back with another bug fix and some sweeping changes to how we build and publish our docs after the issues stemming from our v4.1.x launches.

When we launched v4.1, we ran into unexpected issues with having to rearrange asset paths after deploying, resulting in broken image URLs, a busted service worker, and more. Since then, we’re ironed out most of the kinks and introduced a new docs directory structure inside the repo. Nothing should change for anyone using our docs, but those contributing to the project and developing locally may need to rebase their changes or update their branches accordingly.

Beyond the file structure changes, here are the highlights for v4.1.2:

Checkout the full v4.1.2 ship list and GitHub project for the full details. Up next will either be v4.1.3 or v4.2 depending on how smoothly this release goes and how well we can keep up with reviewing and merging pull requests.

Head to the v4.1.x docs to see the latest in action. The full release has been published to npm and will soon appear on the Bootstrap CDN and Rubygems.

We’re a few weeks out from v4.1 and we have our first patch release of Bootstrap 4! It’s a straightforward set of bug fixes and build tool quality of life updates.

Here’s a quick rundown of some of the changes:

Checkout the full v4.1.1 ship list and GitHub project for the full details. Up next will be v4.1.2, another patch release to address the next set of CSS and JS bugs you’ve help share with us since v4 launched.

Two months ago we shipped the first major release of Bootstrap 4 and we’re thrilled y’all love the latest release and our brand new themes so much. Today we’re shipping our first minor release, v4.1! This release comes later than expected and some of the fixes we intended, but there’s still a boatload of fixes, docs updates, build tool changes, and even a few small new features.

With the release of v4 stable, we moved to a versioned docs setup, meaning each minor release would bring with it a new hosted version of our docs. This allows folks who haven’t yet upgraded stick to the docs they know and love and avoids breaking URLs across the web. With today’s release, our we’ll have a new URL for this release’s documentation, getbootstrap.com/docs/4.1/. The previous URL, getbootstrap.com/docs/4.0/ will still work as y’all would imagine.

Here’s what’s new in addition to our bug fixes and docs updates:

Be sure to look at the ship list and project board for more details on all our fixes. Also, as a small heads up, we’ve split our issue template on GitHub into two separate templates, one for feature requests and one for bug reports. Please let us know if you have any feedback on the change.

Next up, we’re looking at a v4.1.1 release. There are some bug fixes for input groups, form fields, and more that I know we need to tackle sooner than later. These were supposed to be in v4.1, but we couldn’t make it happen in time.

Just over a month ago, we shipped the long awaited Bootstrap 4 stable release. With a brand new codebase designed to better support customization with all new components and documentation, it was the perfect time to debut some brand new themes built. Today, we’d like to introduce you to our brand new Bootstrap Themes marketplace. 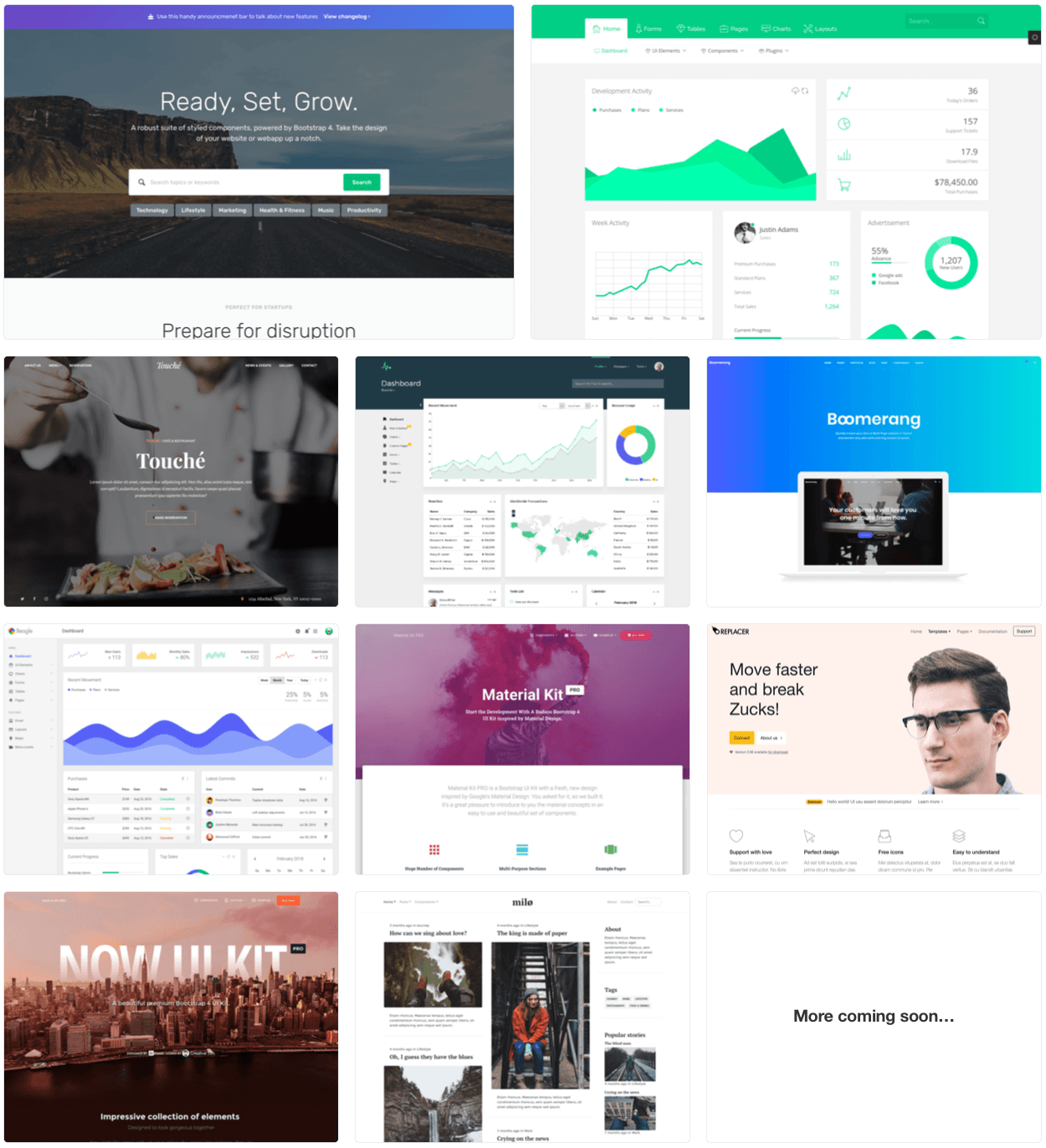 Over the last several months, we’ve been hard at work with theme creators to build the best themes for you. When we created our original three Bootstrap themes, our goal was to provide the best themes, build tools, documentation, and support to everyone building with Bootstrap. With today’s update, we’re adding 10 new themes to the mix from a global community of designers and developers.

Every theme is built on Bootstrap 4 (stable, no beta or alpha here!) and comes with its own build tools and customer support. Prices are set by creators with pricing that incentivizes unique and well supported themes. Collectively, this inaugural batch of theme developers have built themes used by over 500,000 people. We’re excited to grow our Themes user base, push the boundaries of premium themes, and help everyone bring their ideas to life on the web.

Our new marketplace isn’t just for buying themes. If you’re a theme creator, we’d love to work with you to include your themes or to build new exclusive themes. We’re looking for new creators to design and build high quality themes, provide first class documentation and support, and help create unique experiences built on Bootstrap.