It’s the biggest release since v5 itself—Bootstrap v5.2.0-beta1 is here! This release features redesigned docs, CSS variables for all our components, responsive offcanvas, new helpers and utilities, refined buttons and inputs, and lots of improvements under the hood.

Given the size of the update and time since our last release, we’re doing something different and shipping it as a beta first. Keep reading for details.

I want to start by acknowledging the time it’s taken to ship a new release. As an open source maintainer, I’m constantly worried about not doing or being good enough of a developer for my projects. Pair that with a distributed team all working through this pandemic and me having a heart attack, we’ve all needed some down time. I managed to put together a Bootstrap Icons release with what energy I had before needing another break. The rest of the team has also needed some well deserved down time.

I ask that you all please take some time to send some appreciation and support to your favorite open source maintainers. Everyone could use a little more love in this work.

All that said, we’re shipping v5.2.0-beta1 first since it’s been so long—we’d love your help testing things out. We’ll follow up with a stable release as soon as possible.

Okay, now onto the good parts!

Another release, another docs refresh! From the get go, you’ll notice our Bootstrap Purple™ is much more vibrant now, making everything feel brand new. We’ve rewritten our entire homepage to better show off all the awesome features of Bootstrap. 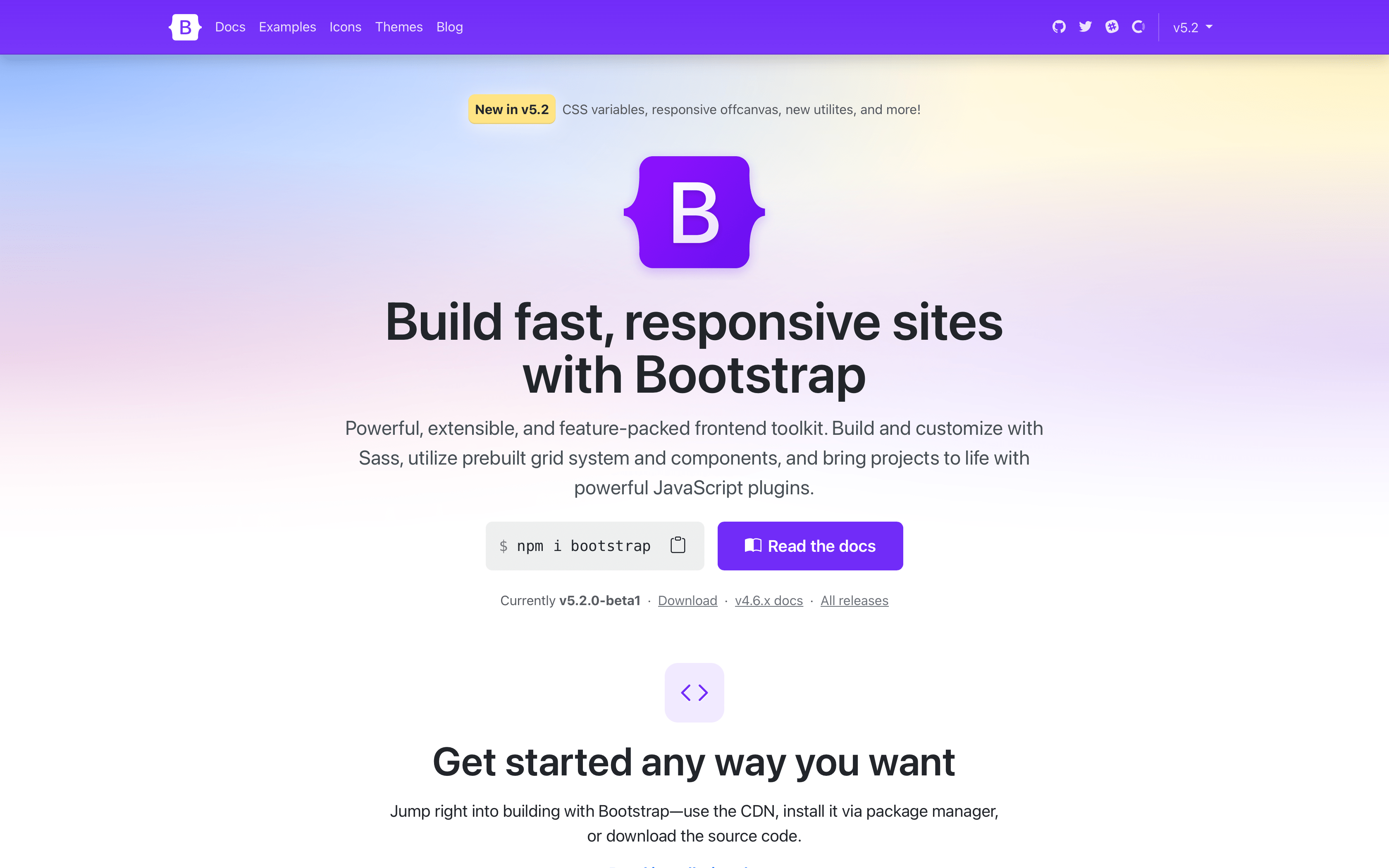 See the homepage in action and let us know what you think! 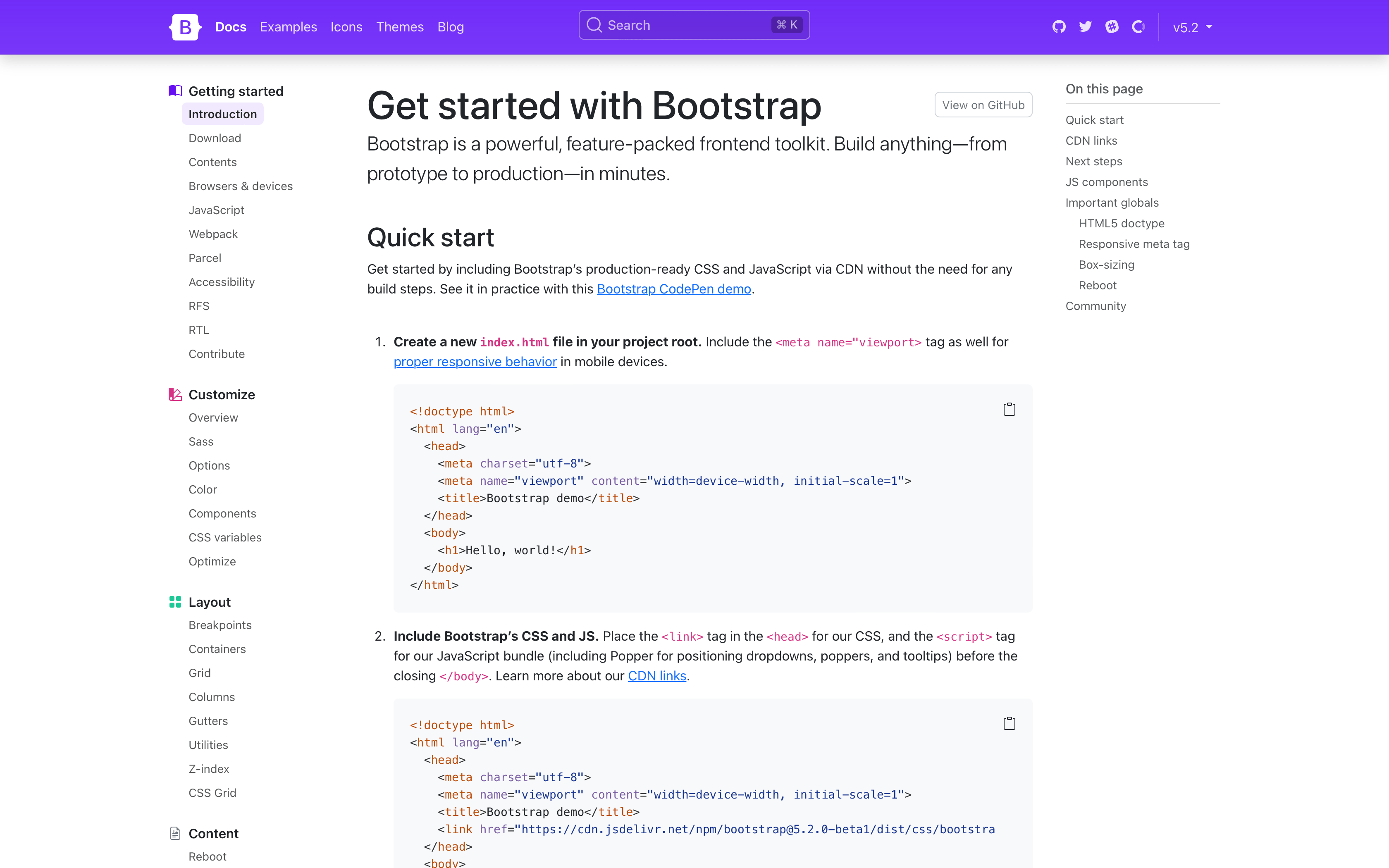 Stepping into the actual docs, you’ll notice quite a few changes. We’ve streamlined our navbar, done away with our subnav, and changed the sidebar to always show every page link for greater discoverability. Show above is also our refreshed quick start guide, which is now a step-by-step instructional guide for using Bootstrap via CDN. 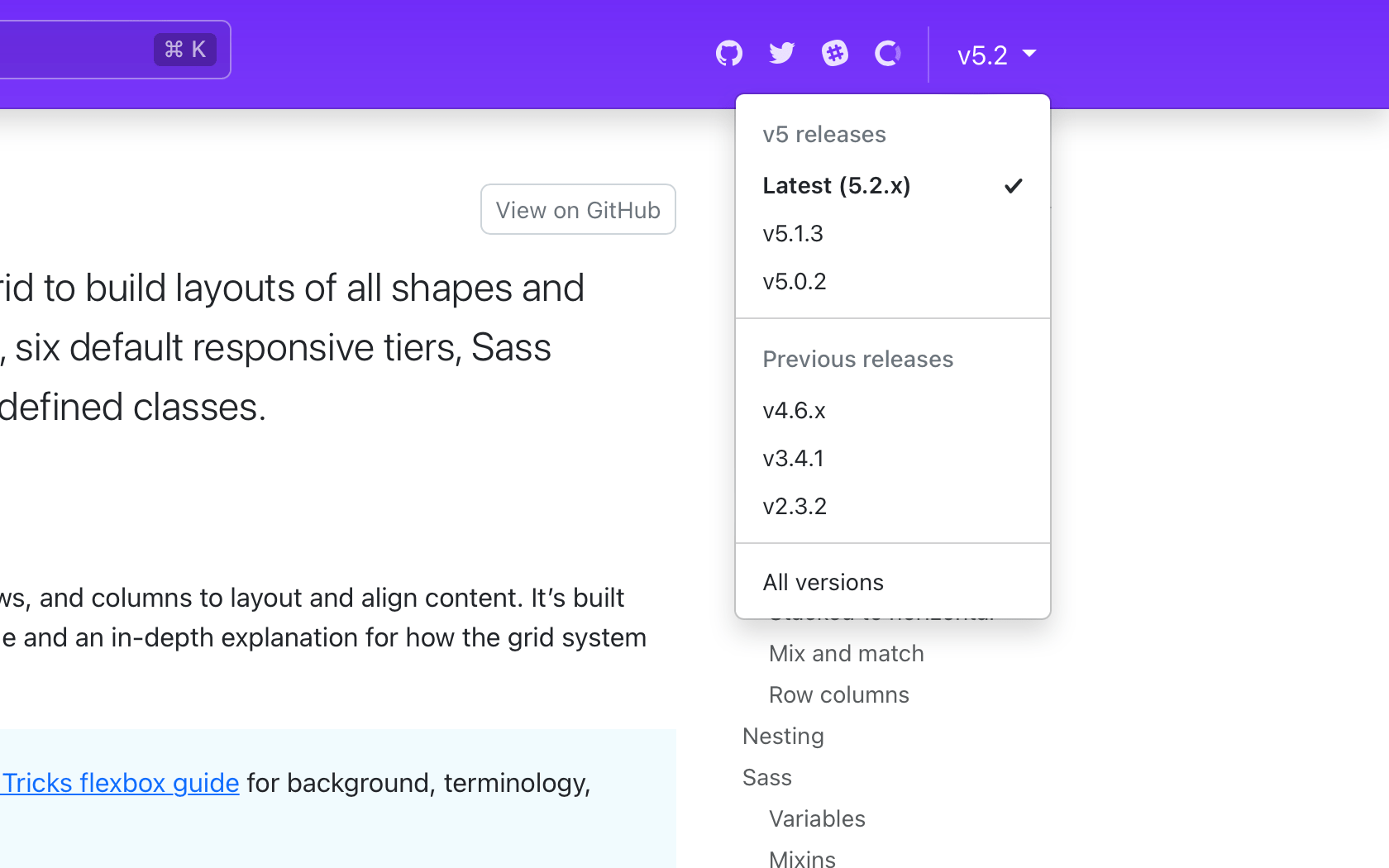 The refreshed navbar also has a long-awaited new version picker for v5.2.0 and beyond. From any page, click the version and see options to navigate to previous minor releases of that same page. When a page doesn’t exist in an older release, you’ll see a disabled version in the dropdown. We currently have no plans to link pages across major versions. 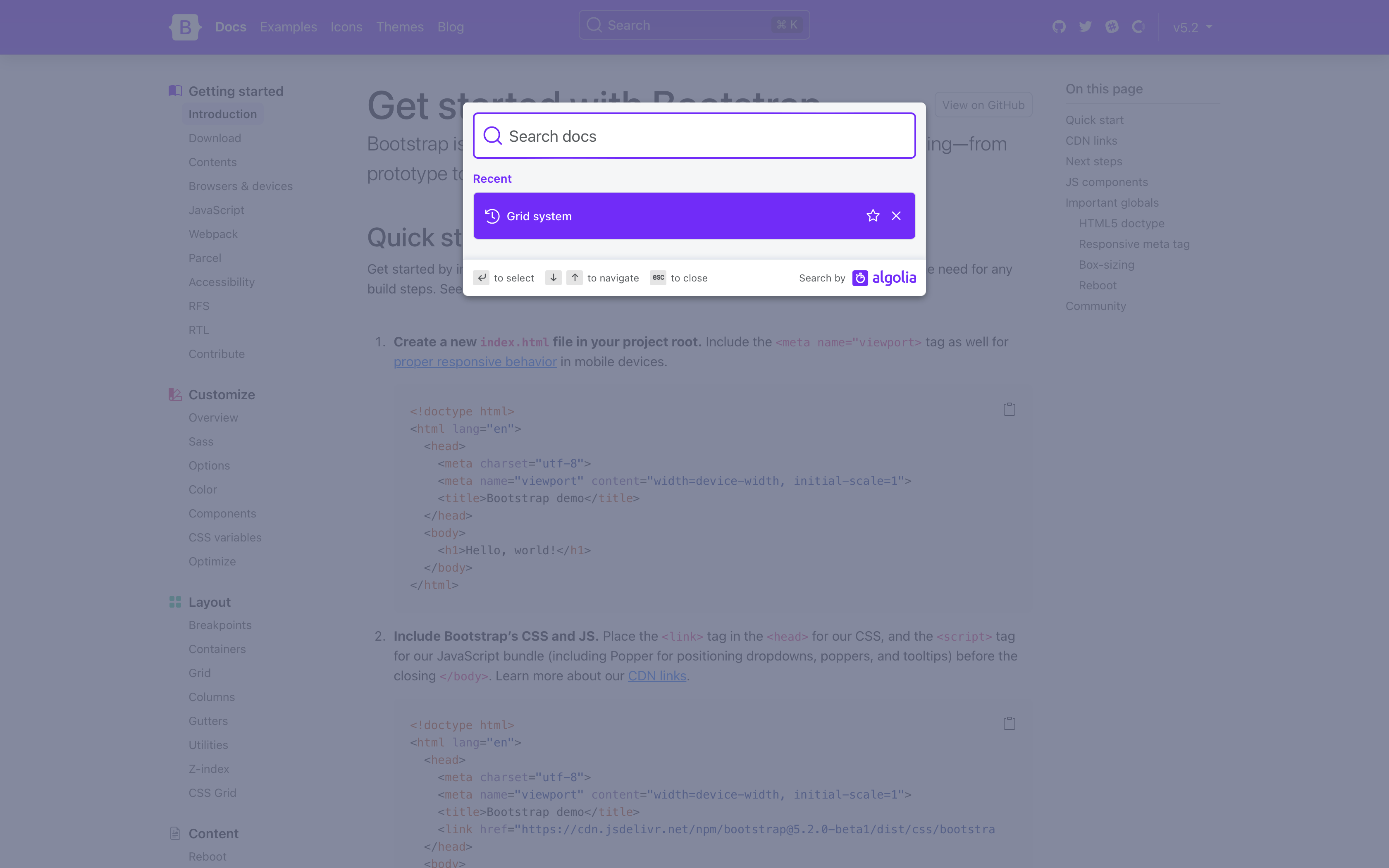 The docs search is now powered by the latest version of Algolia’s DocSearch, bringing an improved design that even shows your most recent searches.

To coincide with our docs redesign, we’ve given our buttons and inputs a slight refresh with some refined border-radius values. It’s a small change, but a welcomed refresh to keep things modern and fresh. Here’s a look at the before and after of our buttons:

And the before and after of our inputs: 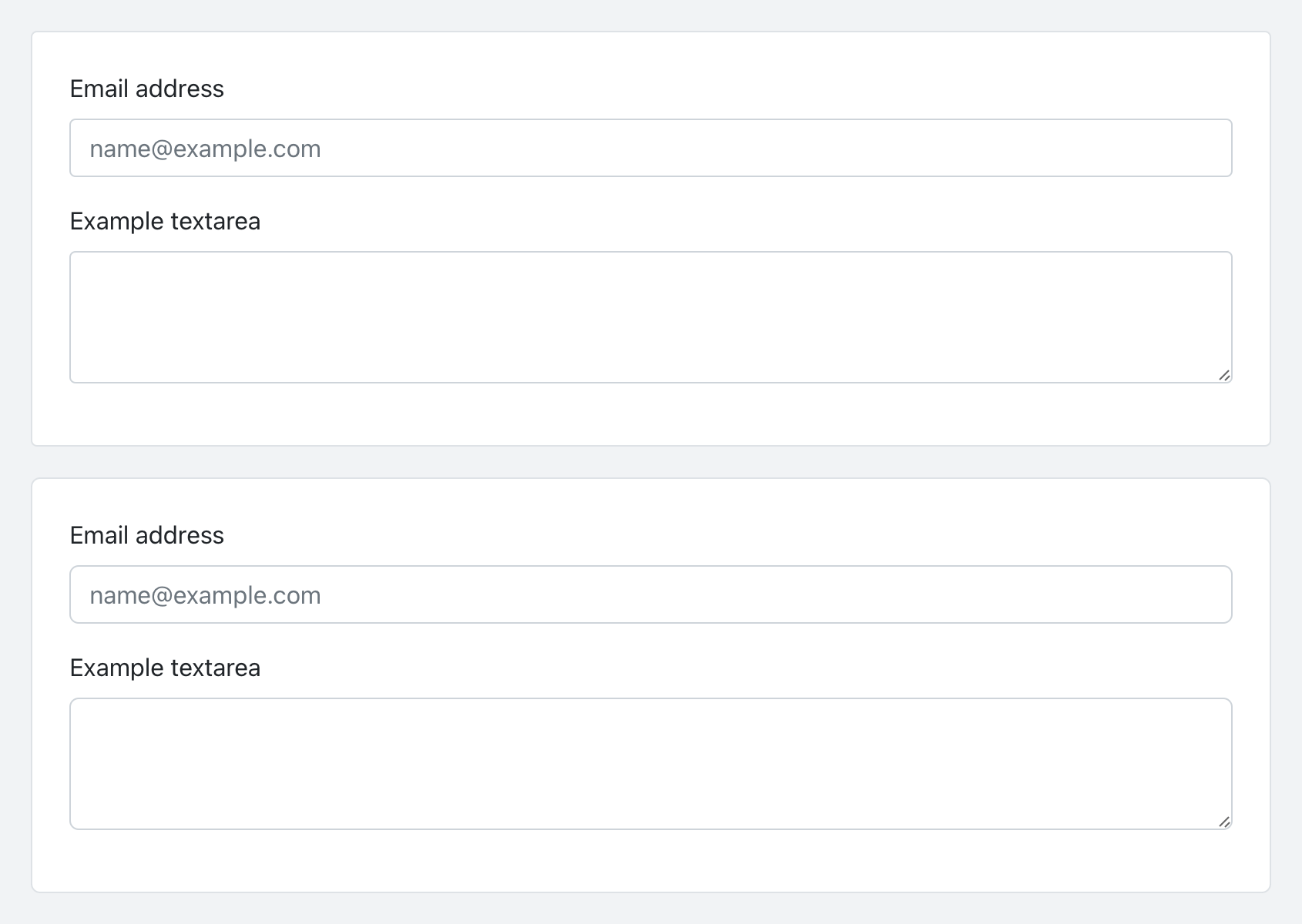 With this release, all our components now include CSS variables to enable real-time customization, easier theming, and (soon) color mode support starting with dark mode. Every component page has been updated to include a reference guide of the relevant CSS variables. Take for example our buttons:

Check out all our components to see how you can customize them to your liking.

Bootstrap v5.2.0-beta1 introduces a new Sass file with _maps.scss that pulls out several Sass maps from _variables.scss to fix an issue where updates to an original map were not applied to secondary maps that extend it. It’s not ideal, but it resolves a longstanding issue for folks when working with customized maps.

We’re continuing to invest in our helpers and utilities to make it easier to quickly build and modify custom components.

For a complete list of changes, see the project on GitHub.

Much of the work we’ve done in v5.2.0-beta1 has been in support of adding dark mode to Bootstrap. Yes, it’s finally coming in our next minor release! 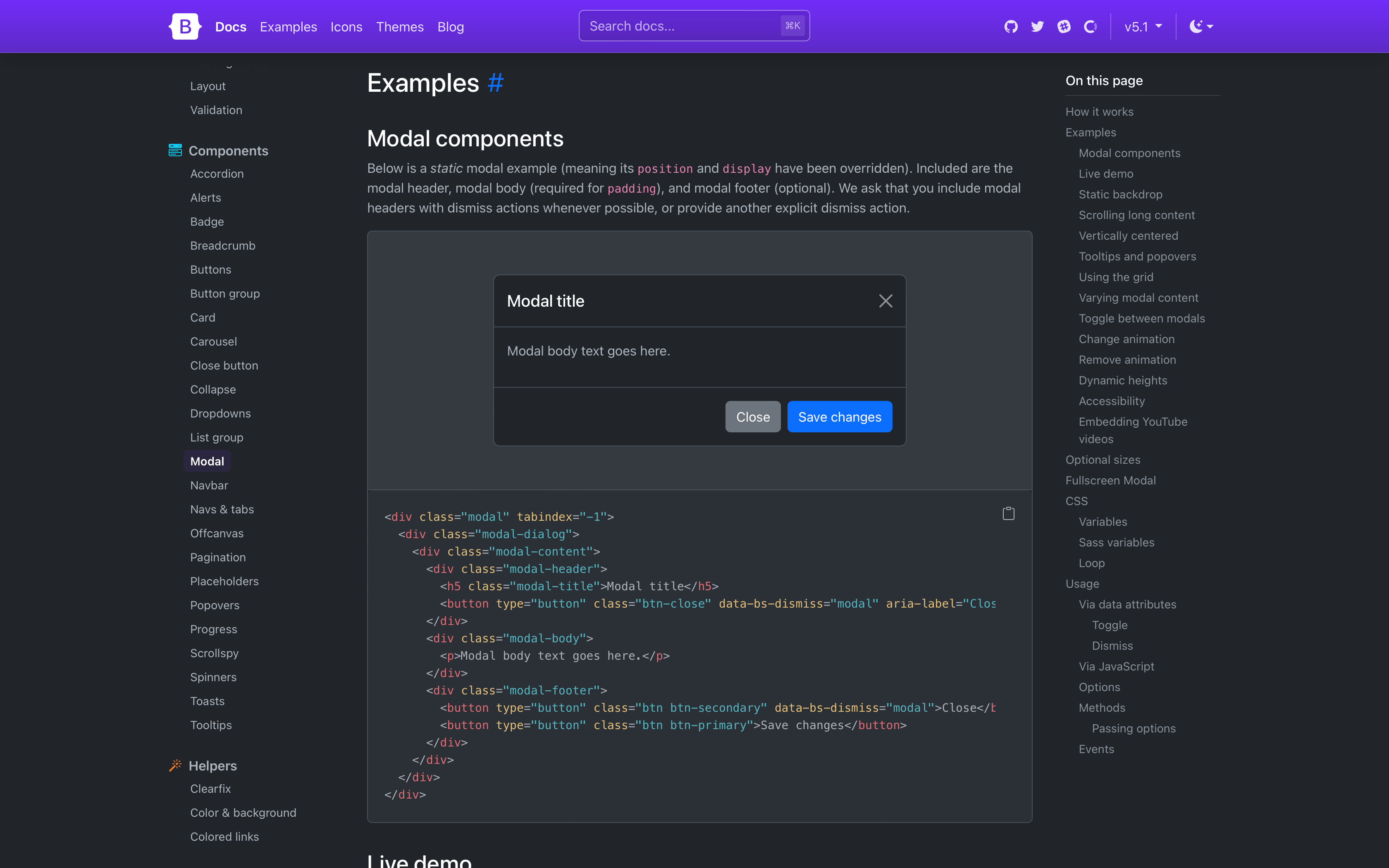 We’d love your feedback along the way, so check out the dark mode pull request and dark mode staging site to test it out.

There’s lots to look forward to in our next minor release, though we’ll likely have some bug fixes along the way.

And likely a lot more!

Read the GitHub v5.2.0-beta1 changelog for a complete list of changes in this release.

Bootstrap Icons v1.8.0 is here with over 140 new icons, including dozens of new heart icons ready for Valentine’s Day and dozens of filetype icons. We’re now at almost 1,700 icons and is once again our second largest release. Keep reading to see what’s new.

Perfect for Valentine’s Day or any other time you need to show a little heart, there are dozens of icons to choose from.

Want to visually show the extensions of your files? There are tons of new options for programming languages, audio and video, images, and more.

Elsewhere we’ve expanded a number of other categories of icons. There are some new medical icons (more are planned), lots of new clipboard icons, additional tools, and more.

Bootstrap Icons v1.7.0 is here with 120 new and updated icons, taking us over 1,500 total icons for the project! It’s the largest update since the initial release, so keep reading to see what’s new.

This update was a lot of fun for me—drawing all these tiny computer parts most of all! There are dozens of new computer-related icons for parts, ports, and peripheral devices. There are also several new brand icons, including Meta, and some other fun icons like a new robot head and a boombox.

Bootstrap v4.6.1 has finally arrived! Biggest change here is a re-implementation of our Sass division functions and updates from v5, as well as some accessibility improvements and general bug fixes.

Read on for the highlights or head to the v4.6.x docs to see the latest in action.

We’ll be flipping back to v5 development after this release, focusing on v5.2.0 with some additional updates to using more CSS variables and other awesome features. Sometime after that, we hope to ship a v4.7.0 release with some additional backported features and improvements to v4.

We’ve officially passed 1,400 glyphs in Bootstrap Icons with this release—woohoo! Seems utterly insane to me that the project has come this far and there are still so many more icons to include.

We have a few dozen new and updated icons in this release, including:

We’ve added a handful of new features and enhancements to how you can use Bootstrap Icons in this release:

Our next minor release will continue to see improvements to our icon permalink pages, adding more options for copying and pasting our icons. If you have other suggestions, please don’t hesitate to open a new issue!

We’ve fixed a few glitches with existing icons in this release:

Found another bug, or have a suggestion? Check out the issue tracker and open an issue if you don’t see one already opened.